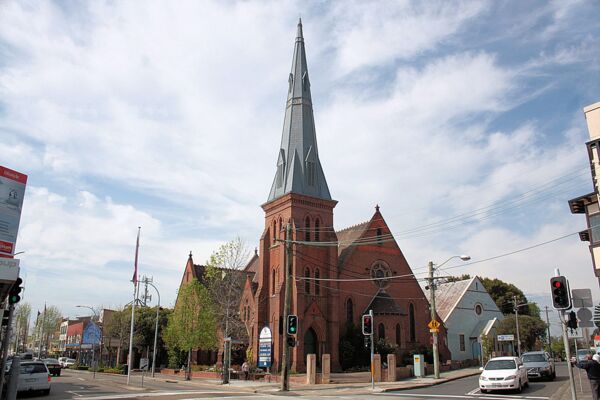 A Foundation stone was laid on 13 January 1883 by the Honourable Charles Campbell MLC.

A large Gothic Revival Church built around 1888 and designed by architects Spain & Cosh. Styled in the early English style constructed of red brick with stone, brick and terracotta detailing. The tall corner spire has two tiers of windows and is clad in interlocking zinc sheets.

The hall, a simple rectangular building, incorporates the original church school built on the site in 1883.

The rectory was substantially renovated in a Georgian style in 1956 by Prof. Leslie Wilkinson.

The organ was built by Sydney builder, William Davidson around 1897, and installed in 1900. It had originally been built to be used at St Andrew's Cathedral while Davidson rebuilt the Hill organ there in 1899.
The organ has had two reconstructions, the first by C.W.Leggo between 1928 and 1929 and the second by Ian Brown in 1974.

1. The Parish of St Clement Marrickville Jubilee 1886-1936. A Brief record of its history.
2. Cable Clerical Index