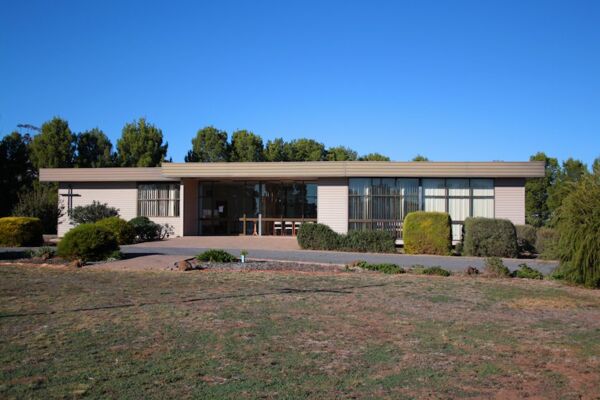 On 5 October 1875 Fr P.D. Moore came to Minyip and performed the first real Mass for the area. He took the opportunity not only to Baptise the son of James and Mary O'Callaghan but he also chaired a meeting of locals with the intention of establishing a church for the Minyip and Murtoa area.

Architect Michael Ryan of Horsham was engaged to draw plans for a simple wooden church. By 1875 the town had been surveyed and in the following year a church had been erected. For the next 15 years Priests from Horsham travelled to Minyip to perform services.

The first recorded marriage in Minyip was that of John Panowitz to Catherine O'Leary on 3 September 1876.

In 1888 the church had to be enlarged and 20 feet was added by builder J.H. Brady at a cost of 47. Over the next 80 years many alterations had been made including those to the Nave, Sanctuary and the timber buttress. An inspection also revealed sever termite and dry rot damage.

By March of 1987 it was decided to build a new church south of the present church. A prefabricated building by Modcon Constructions of Ballarat the building was 25m x 13m in size consisting of a chapel, meeting areas and other rooms. A large amount of work to clear and prepare the land was carried out by volunteers under the leadership of Rodney Clarke. The final cost was $1500,00

The Church was blessed on 6 December 1987 by Bishop Ronald Mulkaerns.