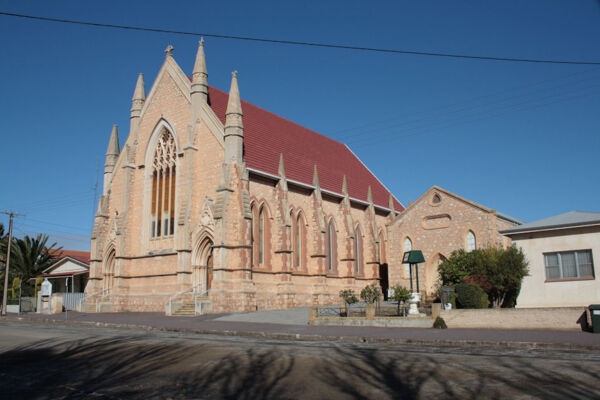 Formerly a Methodist Church, this Gothic Revival Church was designed by R. Rees and built by Nettleton and Thorne between 1873 and 1874. The stained glass is notable, as are the elaborately moulded openings and finials. The adjacent hall was the original church.

The original Church on this site dates from the first Sunday in February 1867. It had been enlarged by 1870 but was still too small. In early 1873 it was decided to build a new Church and £1,000 was promised towards the project. In July 1873 tenders were accepted and a memorial stone was laid on 6 October by Charles Drew, JP, who had been the first mayor of the Municipality when it was proclaimed in 1872.

The cost of the building was £4,000, and the contractors were Rossiter and Davies plus Nettleton and Thorne. The gallery, part of the original design, was never included. The original slate roof was replaced by one of corrugated galvanised iron in 1913; stained glass windows were added in 1921 and 1937.

The Foundation stone was laid on 6 October 1873 by the Moonta Mayor Charles Drew J.P.