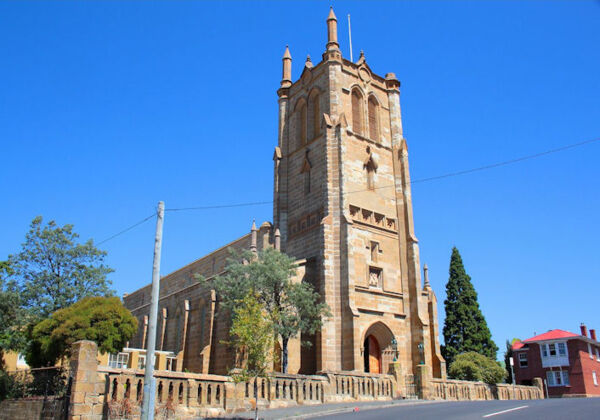 The foundation stone was laid in 1841. The bell tower is of international heritage significance, and it contains Australia's oldest bells, weighing over 2.5 tonnes. The bells were first rung on Regatta Day, 1847. Archdeacon Hutchins was the main proponent behind the construction of Holy Trinity Church.

The church was designed by ex-convict James Blackburn, who was the first in Australia to design a church in correct Gothic style. The entry is under the square tower, which has four levels, and was topped with four spirelets. The buttresses on the tower have gabletes.

The stone walls around three sides of the property create a coherent setting of a grand church within its own precinct. The original, traditional, stained-glass windows in the south wall were replaced in 1922 with those of a contemporary design by local artist Lucien Dechaineux.

Formerly an Anglican church it was sold to the Greek Orthodox community after a 2007 review. Foundation stone was laid by Sir John Franklin.