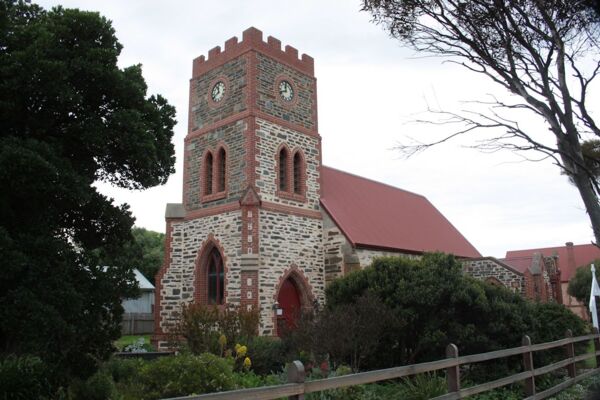 At a public meeting held in Port Elliot on 27 January, 1854, a committee was formed to progress the building of a church, to be chaired by Mr Buxton Forbes Laurie.

The Foundation stone was laid by Dean Farrell on 22 June 1854 and by December the structure was so far completed that divine service was held there on Christmas Day 1854, although the building had only glazed Calico windows. The plans for the church were drawn up by a Mr Jones. He was asked to include a belfry and lantern windows. He was paid 10 guineas for his work.

Constructed of random bluestone, line pointed, with brick quoins, strings, crenulation and surrounds to openings, head to openings treated in Gothic manner. External walling buttressed, with lancet to each bay. Set on bevelled brick-topped plinth. Part of tower above level of paired lancets thought to have been added in 1937 additions. Construction was carried out by Messers Shepherd and Pyke.

On 22 June 1854 the foundation stone of the building was laid by The Very Revd James Farrell, Dean of Adelaide, with a last minute switch in name from St Saviour's to St Jude. The tower was completed in 1937.

A new Organ for the church was purchased for £10 in 1899. The money was advanced by a parishioner who would gladly hand over the reciept to the Corporation of St Judes as soon as the money was repaid.