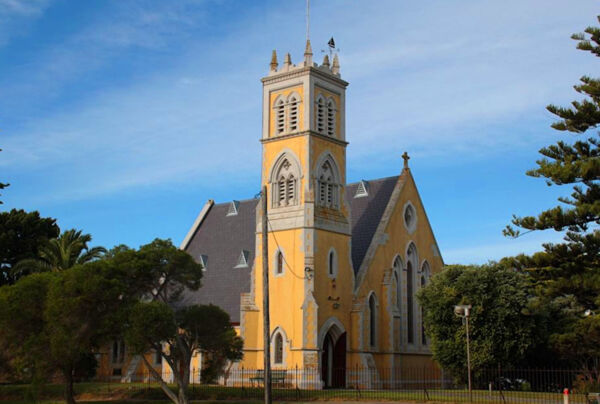 In 1858 Wesleyan ministers visited the town and services were held at Pilot Reid's home. and also at Mr Simpkin Snr's home. The congregation soon became too large to meet in private homes, and so the Queenscliff Reading Room was rented for services. The Rev. Francis Tuckfield arranged to build a wooden church measuring 18 feet by 30 feet, and the foundation stone was laid by Mr John Lowe of Geelong. Tenders were let for the church's construction, but due to unforseen circumstances, the church building was not proceeded with. Services continued to be held in the Reading Room until February 1868.

The Church was designed by Melbourne architect, Albert Purchas, and an important example of the early English Gothic style parish church in Victoria. The tower is a distinctive landmark in Queenscliff and the church has significant associations, firstly with the Lieutenant Governor C J La Trobe who selected the site and with judge Thomas Fellows, local politician, principal church benefactor and later distinguished Supreme Court judge.

The Church was erected between 1863 and 1864. The lofty square tower was erected in 1877 to Purchas' design by Mr Chaffey, contractor.

Built by 1871 Geo. Fincham and Co. The instrument has been accommodated at the eastern end of the south aisle of St George's Church, facing west, where it speaks directly into the building.