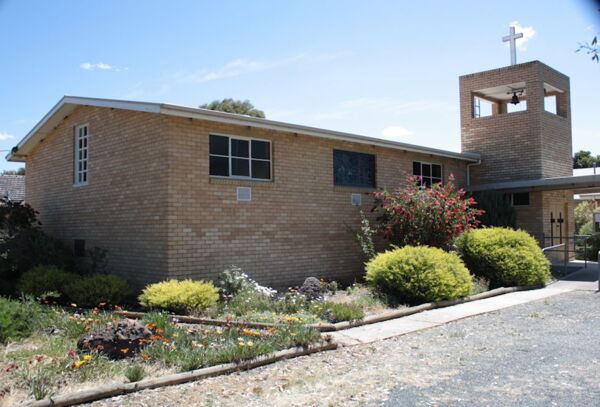 During 1882 - 1883 an attempt by the Church of England to establish services in the Tongala area proved unsucessful and so it continued for a time under Rochester then in the 1890's under Tatura and later under Kyabrum. By 1912 services and Sunday school were being held in the Public Hall in Magan Street.

In 1914, Tongala, Koyuga and Wyuna West areas were, created a separate readers district with W.J. Reeve in charge. In 1915, St. Thomas, Wyuna, was added to the parochial district. After the departure of Mr. Reeve, the Rev. F.A. Philby was appointed Deacon in charge and following his priesting, celebrated his first communion service on December 17, 1916.

In 1957 tenders were called for a new church building and Mr W Kronk was the successful tenderer with a quote of £7,000. A Foundation stone reads, " This Foundation stone was laid by Ronald Bishop of Bendigo 21st July 1957".

An old foot pumped Organ or harmonium had been in service as far as is known since the first church was built in 1913. In 1961 Mr Jim Barnes donated a new Lowry electronic Organ.