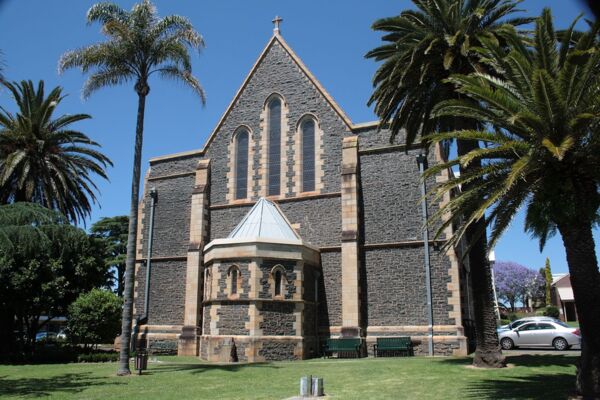 A small school room was first erected on the site in 1857. In the 1860s, a fund was begun to finance a new and more substantial Church. Land situated near the new railway station was offered by the Honourable James Taylor and it was decided to use this land to erect the new Church, which was dedicated to St James in 1869.

In 1894 plans were made for a new Church of St Luke. Plans were prepared by J H Buckeridge, the Diocesan Architect, for a Church to be built in two stages. The foundation stone was laid by Lady Norman on 13 March 1895 and the first stage of the Church was dedicated on 14 February, 1897.

A substantial bluestone building it was constructed in stages between 1897 and 1959 to the original design of Church of England diocesan architect, John Hingeston Buckeridge. The present church replaced an earlier timber slab building constructed in the mid 1850s.**

The foundations of the building and base courses are of sandstone and a projecting course of sandstone forms the junction between the sandstone and bluestone of the walls. The roof of St Luke's is gabled over the eastern altar end of the church, western entrance end and the completed northern transept and the incomplete southern transept. The roof is clad with corrugated iron sheeting. The western faade of the building has a centrally located 5-sided projection which is only mid height of the faade and houses internally a baptismal font.**

In 1945 plans were made to construct a second stage of the Church as a war memorial. St Luke's war memorial combines the practical and spiritual with an extension of the fabric and the construction of a Warrior's Chapel.