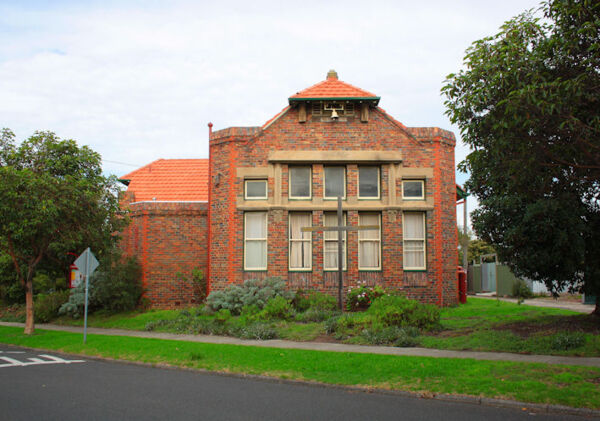 The Foundation stone was laid on 2 May 1925 by his Excellency the Earl of Stradbroke Governor of Victoria. The church is constructed of red brick and was designed by architect Louis Williams and opened for worship in 1925. Williams envisaged a large church with tower, church hall and vicarage however, the church was never built and a combined church and hall now serves as the church.

The organ was built by Robert Mackenzie in 1875 for Christ Church Anglican Church, Castlemaine and was displaced by a new organ in 1888. It was later placed in Baptist churches at West Melbourne and Greensborough before its arrival at Travancore in 1981.

A description of the organ appeared in the Mount Alexander Mail for 24 August 1875:
The greater portion of the new organ for Christ Church (CE) was delivered yesterday. The instrument is what is called a manual' and contains eight stops, viz. open diapason (bass) ditto (treble), viol de Gamba, principal, flute and fifteenth, besides which there is one coupler and bourdon pedal of two octaves, three composition pedals, all enclosed in a general swell. The pipes in front are what are termed illuminated' and the case stained and varnished. It has been supplied by Lee and Kaye and built by R. McKenzie and Co., of Melbourne and as a guarantee of it being a first class instrument it may be mentioned that the same gentleman built the great organ in the Town Hall Melbourne.

Robert Mackenzie was born in England c.1840 and died in Adelaide in 1905. Trained as an organbuilder in England, he worked with Hill & Son, Henry Willis and Gray & Davison before emigrating to Melbourne in late 1871 to erect the Town Hall organ. He is known to have built 10 new organs in Victoria and South Australia and worked on a number of others, also erecting new organs in four Australian states exported from England, his major work being the organ at The Scots' Church, Melbourne.
The organ is of significance as one of two examples of Mackenzie's work that survive in close to original form and the best preserved of the two. Sadly, all of the other examples of his work have been rebuilt or broken up.
It retains its original mechanical manual key and stop action, which is mechanical, although the pedal action is now tubular-pneumatic.