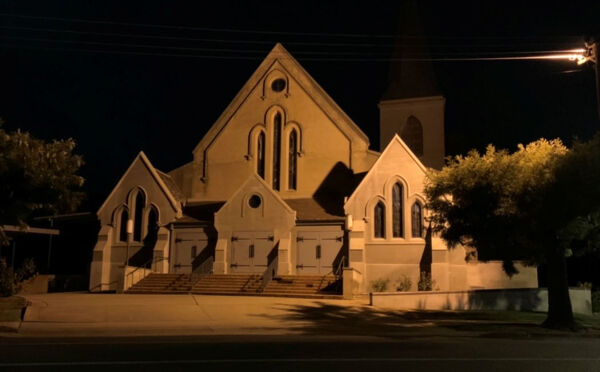 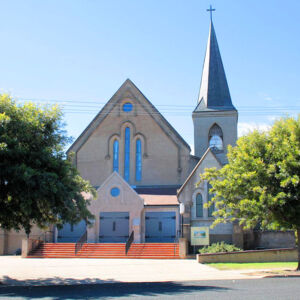 Anglican Church services began in Wagga in 1839. In 1855 it became a separate Parish, and in 1858 it was decided to proceed with the construction of the first church. The Church of St John the Evangelist was commenced in 1859 on land granted to the church by the Colonial Government of NSW on Church Hill, a high point on the Murrumbidgee River to the north of Wagga.

Built in the Victorian Academic Gothic style with a Federation Gothic alteration carried out in 1911. The 1858-59 Church was designed by William Weaver and William Kemp two prominent Sydney architects.Weaver was Colonial Architect 1854-56, Kemp was Architect for Public Schools 1880-96.* The foundation stone was laid on 2 June 1859 by the Police Magistrate Henry Baylis. The successful tenderer was Robert Nixon. The church was brick on a stone stereobate, timber shingle roof, with no porch, 60' long 30' wide and housed 300 persons, built on the highest part of the site.

Between 1905-11 extensive alterations were made to the 1875 structure by William i Monks, a Sydney architect, and Charles Hardy & Co., builder.

In 1963 a copper spire replaced the temporary flat roof on the tower, the sanctuary floor was lowered 18 inches, and the communion rail widened, the choir stalls removed to the western end and the altar was brought forward. Pews were replaced with .modern furniture and a new vestry block added on the north east corner.