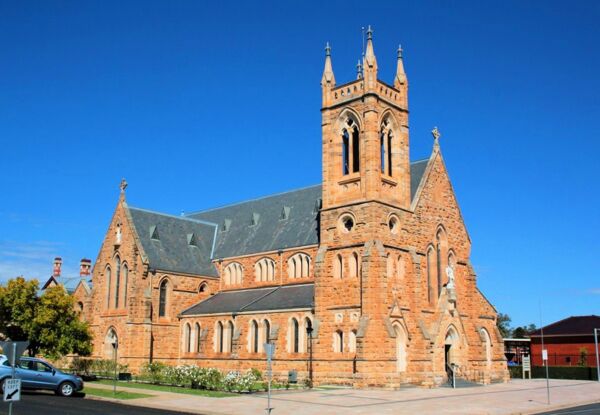 When the Diocese of Wagga was formed in 1917 the church became a cathedral and was extended in 1922-25 to its present size and configuration. The building consists of nave, side aisles, porch, chancel, sacristy, chapel, gallery and tower. External walling is rock faced ashlar sandstone, while internally the walls have been plastered. Mullions and surrounds to openings are smooth dressed stone.

St Michael's is designed in Victorian Academic Gothic style in local sandstone. The slate roof is steeply pitched and gables are parapetted; there are several small gabled vents in the roof. Walls are buttressed. The corner tower (a landmark feature of the building) has round windows with quatrefoil tracery and in the upper level there is further tracery work above paired openings. Standing on each of the four corners of the tower's top are spires. Windows are of the pointed arch type, and in the gable ends there are triple, stained glass windows with label moulds; there is further tracery in the upper part of the central window of these groups.

Entrances to the cathedral are pointed arch, and the main entrance together with the tower entrance are gabled as well. Clerestory windows are in the form of triple, pointed arch windows and these are supported internally by well proportioned Gothic arches. Internal roof timbers are exposed, and the altars display some finely crafted marble.