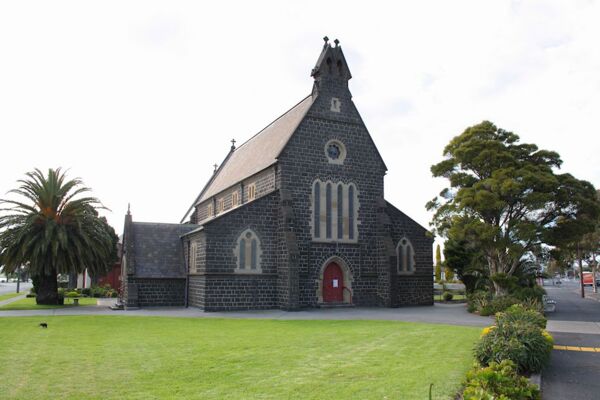 On the 25's October 1849, Acting Vicar-General, Rev. N.J. Coffey applied for 2 acres of land near the village of Ashby. The-Governors finally approved the grant on 25 October 1850. By 1855, a brick school had been built on the site now occupied by the Presbytery. The school was used as a venue to celebrate mass on Sundays and holidays of obligation. In December 1860, Rev. Dr. Fitzpatrick asked for the deeds of the grant, and stated that a new church was to be erected. Work commenced on the William Wilkinson Wardell design early in January 1864. The church had cost £6,000 but was already free of debt. By February 1871, gas lighting had been installed, and for the first time since its erection, evening worship now became possible. In April 1871, a Singing Gallery, located above the doorway was constructed by Mr Nash. In 1913, the inside of the Church was redecorated in the late Gothic Revival style. The Church Hall was finished in 1914 and in 1915, the Presbytery was completed. In 1924, the alter was constructed. During the late 1950's, the church grounds were beautified and the Lourdes Grotto was built as a memorial to Father J.J. Malone.

The foundation stone of the Catholic Church of Saints Peter and Paul was laid by Bishop Gould on 17 January 1864. William Wardell, architect to the Catholic diocese of Melbourne, designed this early English Gothic style Church and Clement Nash built the structure from coursed basalt with freestone dressings. The rectangular plan Church with high gables nave, low side aisles, chancel and chapels is liturgically oriented

The Church of St Peter and Paul is an example of the Gothic Revival based upon Pugin's principles and a notable work of William Wilkinson Wardell, the celebrated ecclesiastical architect responsible for the Catholic Church building program in Victoria from 1858-1878. The Church, with the unusual double bellcote and simple ornamentation is one of few parish Churches in Victoria completed according to Wardell's plans. The triple lancet stained glass window at the east end by Melbourne craftsmen Ferguson and Urie is of note.