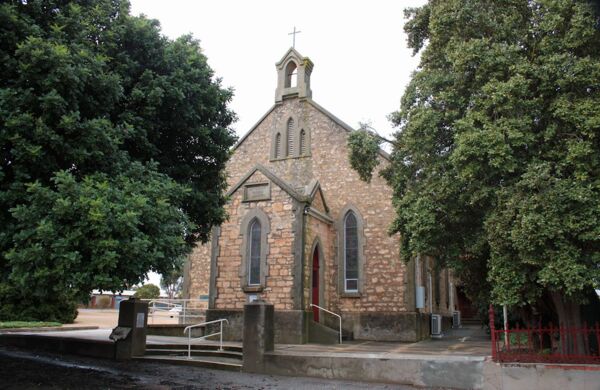 Originally a Wesleyan Methodist church, the Church was opened on Christmas Day 1875. It was built by J Swann and the mason was C Hicks. It cost 800.00. In 1904 the Sunday school hall was built at the rear of the church. A foundation stone attached to that part of the building was laid on 2 November 1904 by Mrs E Greenslade. A porch was added in 1912 and by the following year a wood and iron kindergarten room was included along with an iron fence. In 1921 a series of memorial windows were installed and a renovation was conducted on the plaster ceiling.

Methodism in Maitland was pioneered from Wallaroo, Moonta and Kadina. For this Wesleyan church there were four foundation stones laid on August 17 1875. One by Mesdames, Lamshed, Miller, Greenslade and Reverend T.M. Rowe. The opening of the church took place on Christmas morning 1875.

The land on which the buildings now stand was purchased in October 1874, the foundation stone of the Church was laid on August 17th, 1875.

The total cost being approximately 800. The stones for the building were quarried on Mr Elias Greenslade's farm, now owned by Mr Robert Saint, a great grandson of Mr Greenslade. The lime was burned by various farmers in the Kilns that most farmers had in those days in which they burned lime for constructing their own homes and out buildings.

The Manse was built in 1882 at a cost of 439. The Rev. and Mrs F. M. Rowe were the first occupants. The cast iron front fence was originally across the front of the Church as well as the Manse and was erected in 1910.

At the Church Anniversary public meeting in 1913, the Trust Secretary, Mr J. O. Tiddy stated that the Church had been greatly improved by the addition of an entrance Porch at a cost of 92, which cost had been generously defrayed by one of the Church Stewards, Mr Elias Greenslade.

The school hall was built by Messrs Walker and Denman. The porch is in memory of Elias Greenslade and the stone steps and pillars were placed as a war memorial in the front of the church.

The area comprised of Minlaton, Maitland and the Ardrossan circuits were covered by Maitland visitations in the mid 1800's.